I am sitting, freshly showered and rejoicing in the absence of sand from various folds in my body, on my bed in my Greek apartments. Outside, I can hear the braying of a donkey, a donkey I’m presuming is either in great amounts of pain or great amounts of pleasure — it’s hard to distinguish from the incredibly loud noises it’s making. I realised after writing this that it’s a strange thing to try to determine whether a donkey is receiving sexual gratification or not, but that’s just one of the many mind-expanding joys of travel.

After detailing the strict itinerary we hold ourselves to while holidaying in my last post, we immediately discarded our program and today did different things. I know, I know, what about the beneficial and economical pros of a strictly adhered to relaxation regime? Rest assured, we are professionals working at the top of our game, and our time was wisely used.

Instead of the delicious giant cinnamon donut I’ve grown accustom to, we opted to have a civilised sit-down breakfast by the water. This was in part because one member of our enclave, Martina, was leaving, and it seemed a fitting way to send off someone you’ve spent the last nine days with — particularly when most of that time was spent eating. The other reason was because we wanted bacon and eggs. Multiple birds with minimal stones, and all that.

Farewelling Martina made me very aware of the looming End of Holidays (yes, it warrants capitalisation) that was approaching, and the return to the ranks of the employed. This reentering into reality, albeit a very altered reality from the one I’m used to, has me thinking about the new things I want to achieve during my time in London. I’ve made a mental list of what my primary objectives are in an effort to avoid getting swept up in the working world once again. I don’t want to forget the reasons why I decided to deconstruct a life I’ve spent literally my entire lifetime building. The mental list, which will become a physical one by the end of this entry, should help keep these reasons at the forefront of my mind, reducing the odds of me falling back into old habits. I have a shitty memory: I can’t be too careful.

After leaving Martina to join the throngs of people and suitcases boarding the ferry, our now depleted group drove through the heart of Paros, stopping to explore the township of Lefkes. The town was composed of the stereotypical white-box homes and blue awnings I’ve come to expect, but without the smorgasbord of restaurants and shops found by the seaside designed to lure tourists. The cobbled alleys were quiet and deserted, and we wound our way down stairs and streets to the impressive church at the centre of it all. 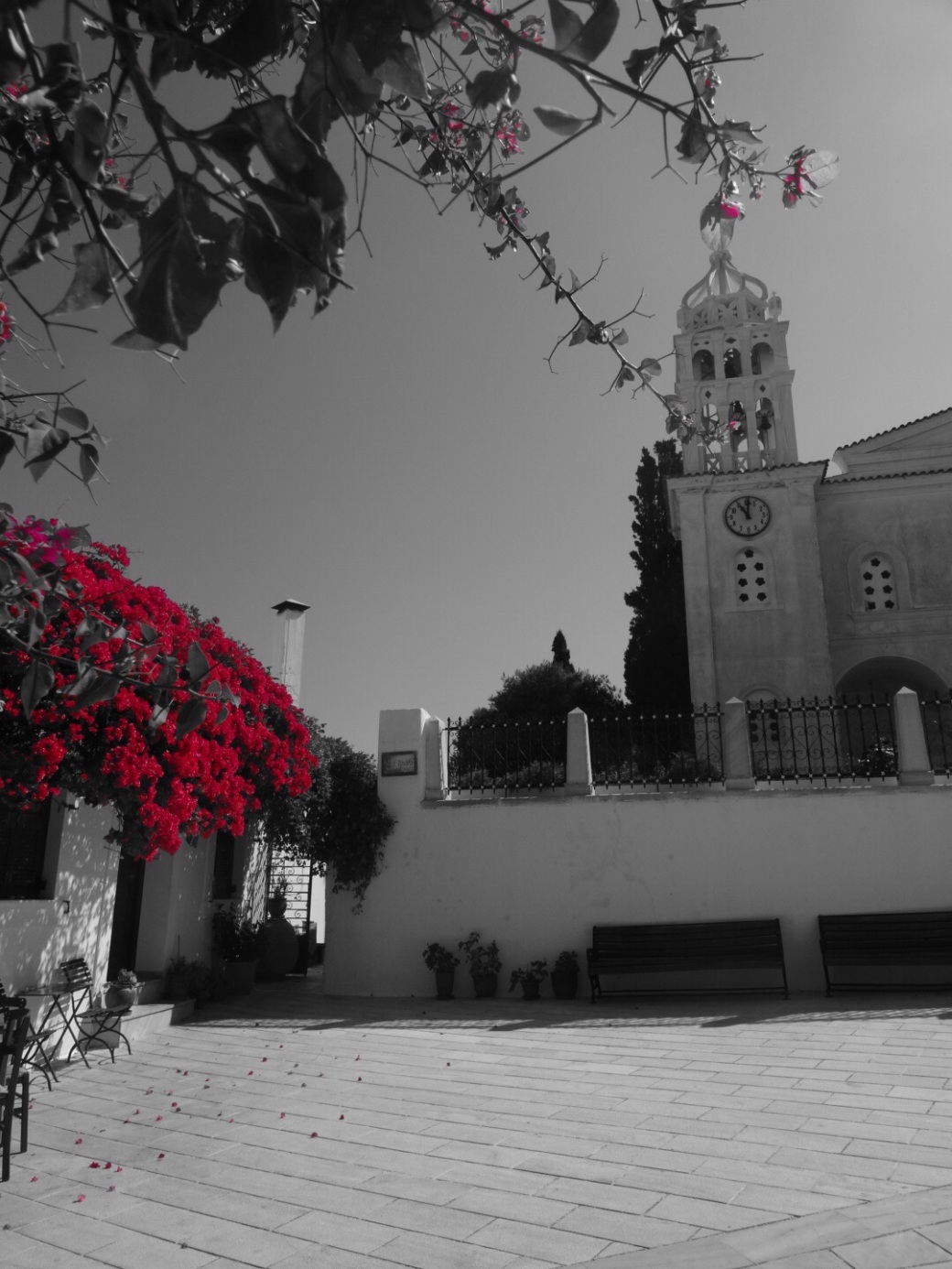 Alex, acting once again as my tour guide despite the fact that this is technically her holiday too (I’ll buy her a donut to pay for her services), told me about the Greek custom of immediately burying the body without ceremony when a person dies. This is done because Greece is always hot and decomposition quick, but also because the ceremony of their death doesn’t take place until a year after burying. The body is exhumed, or rather the bones by this point, and the family sit around, food and drinks aplenty and music in the air, and reverently and respectfully clean each bone, before placing it in a specially crafted box which will become the departed’s final resting place.

I’m trying hard to decide if this is the most repugnant way to farewell a family member or the most intimate. The idea of handling a loved-ones bones is off-putting on a visceral level (bones are meant to be on the inside), but what could be more sacred than ensuring the very core of a person is put to rest cleanly and neatly. It’s probably a bit of both: icky, but nice. Sort of.

After exploring the town and this insight into macabre Greek traditions, we headed to the bays of Paros, one of which is renowned for mud. Apparently the dirt deposits that collect on the beach are full of minerals that are good for the skin, so people come to get in touch with their inner caveman and smear mud all over their body.

Before you ask, yes, I did it. And yes, my skin was silky smooth afterwards. 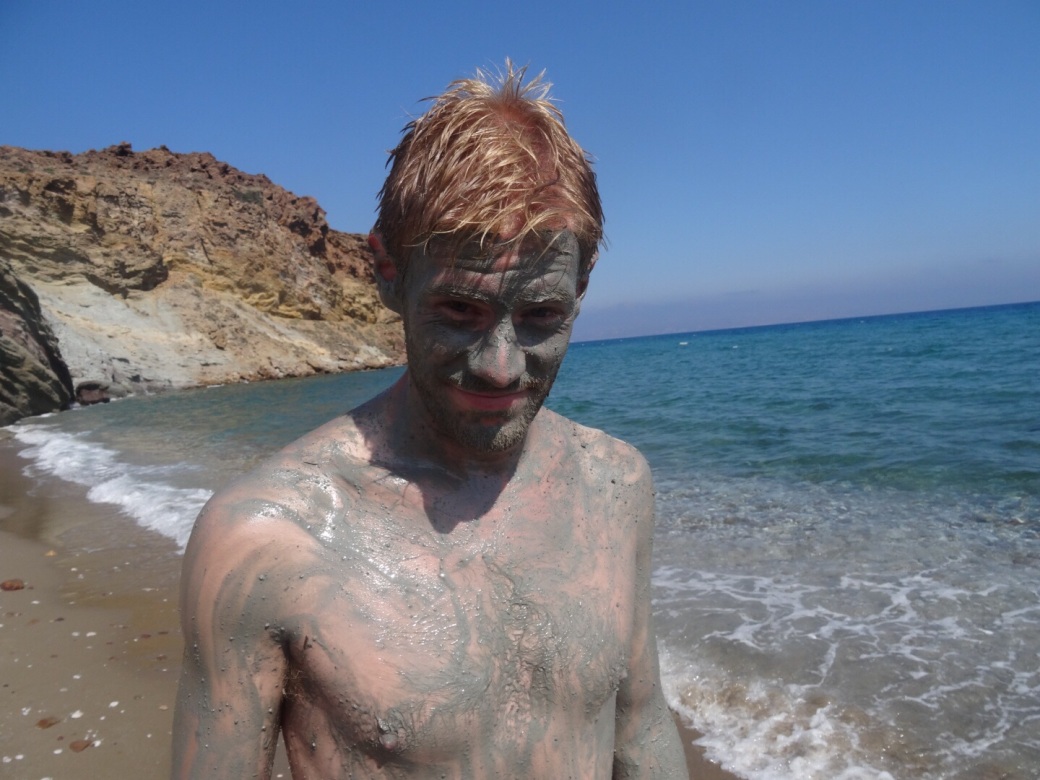 Objectives for My Time in London: (excluding my newly adopted skin treatment regime)

That seems like enough objectives to keep me busy for now. Auf Wiedersehen. (<—Number 3 coming along nicely.)

I am on a rooftop in Athens, twenty-one stories up, the city sprawling in every direction away from me. From this height, it looks like the world’s biggest miniature set, old and off-white figurines stacked as far as the eye can see in the folds of land that is Athens. I am alone.

Well, that’s not exactly true. The luscious rooftop bar and pool is full of holidayers eating and drinking, and soaking in the heat and humidity of this beautiful Greek day. But none of them are my companions. My companions have gone.

An hour ago, Alex and Anna left for the airport, where they’ll catch a flight back to Vienna. I’m picturing them in the airport now, sitting back and enjoying a meal of McDonalds. They were very excited by the prospect of McDonalds.

It feels odd to be alone. Normally, I am a person who enjoys a healthy amount of me time, a self-confessed introvert, but have found this desire absent in the past month. The person responsible for this is Alex, who has filled my days with so many incredible experiences and her own beautiful company, that, rather than feeling drained from so much stimulation, I feel revived. I cannot thank her enough. I know she’s reading this (I’m big in Austria) so once again, thank you for giving me the best month of my life. I will buy you as many chicken McNuggets as you like.

But even though I’m sitting here, sulking in paradise over my new isolation, I really have no reason to complain — these last few days of my holiday have been as eventful as the rest. I’m not sure if I’ve mentioned it on the site before, but the plan has always been to end the trip with a wedding. Not mine, for the record.

A close friend of Alex’s, Natassa, is the marriage participant in question, and before I set out from Australia, Alex invited me to attend as her date. She reasoned that she’d never been to a Greek wedding, and I’d never been to Greece, so it was a good opportunity for both of us. I whole-heartedly agreed with her reasoning.

We made the return journey from Paros to Athens on the ferry, and after checking into our hotel, spent the evening exploring the city and, of course, eating delicious food. Athens lacks the beauty of the islands, the buildings looking tired and worn, shades of dirty cream instead of the vigorous white of Paros, but it has history.

On Saturday, while Alex went to Natassa’s mother’s house to have her hair done and other secret things that women do before weddings, I ventured into Athens, map in hand, keen to see some history. I’m a big lover of fantasy books, and many of them are set in Ancient Athens, or fictional places that very closely resemble Ancient Athens, so I was excited to see some of the places I’d read about. I wandered through ruins, Hadrian’s Gate and the Temple of Zeus, mentally reconstructing what these monolithic buildings would have looked like back when they were freshly built, and marvelling at the beauty and ingenuity of edifices crafted thousands of years ago. Naturally, I took a selfie. 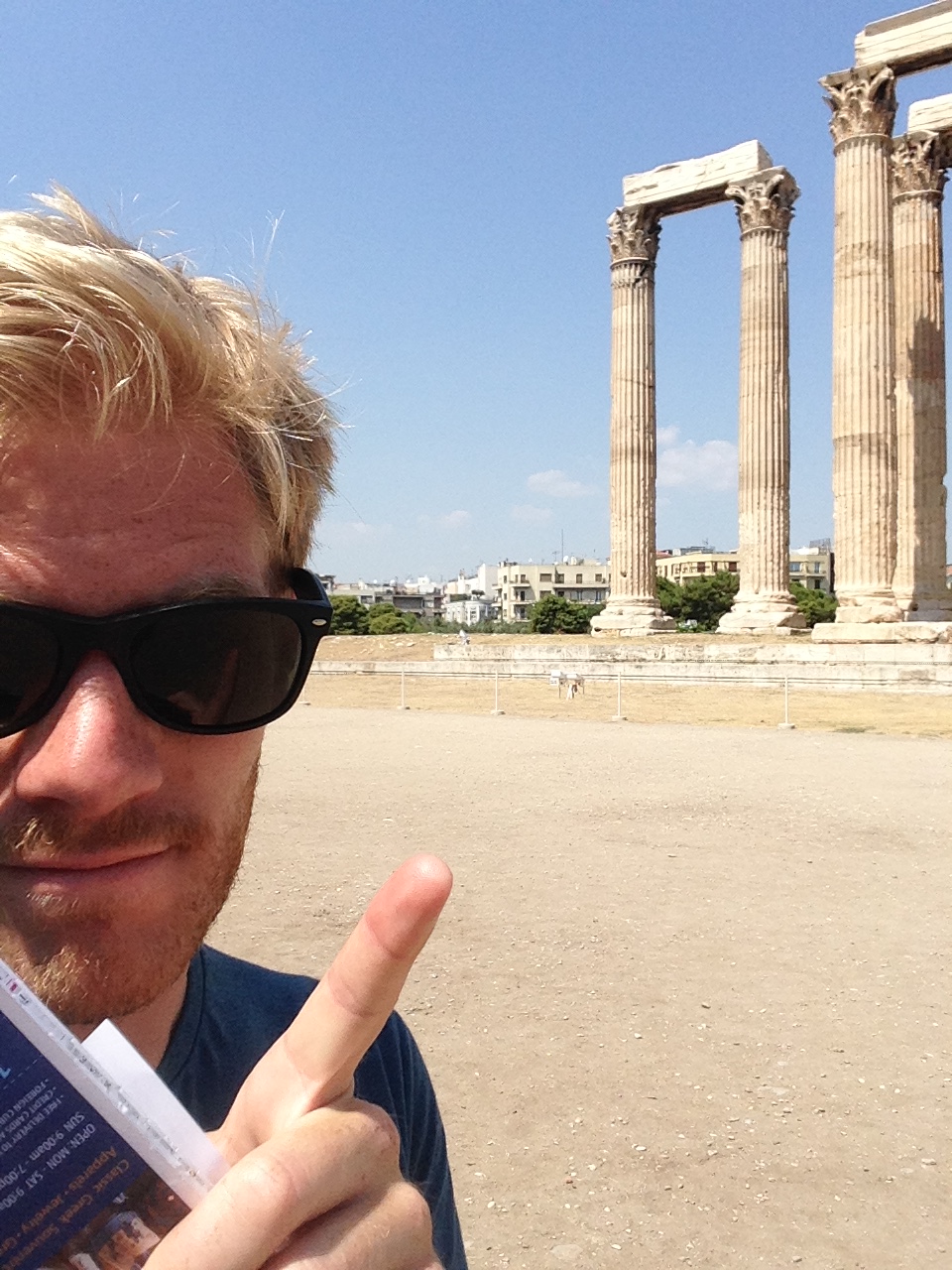 The wedding was a slightly strange affair. Not that it wasn’t lovely, because it certainly was, set against the Athen’s coastline, but rather because during the ceremony, which took place before a tiny chapel, most of the guests talked and wandered around, giving the main event only minimal attention. A Greek friend of Alex’s, Christina, said that sort of behaviour was common, and the betrothed didn’t seem bothered. A small choir of men sung in Greek while the priest intoned words which were lost on me, metal rings were swapped over the heads of Natassa, the bride, and Franz, the groom, as if the best man was unsure of which head it should land on, and then we all threw rice at the newly married couple. It was good fun. 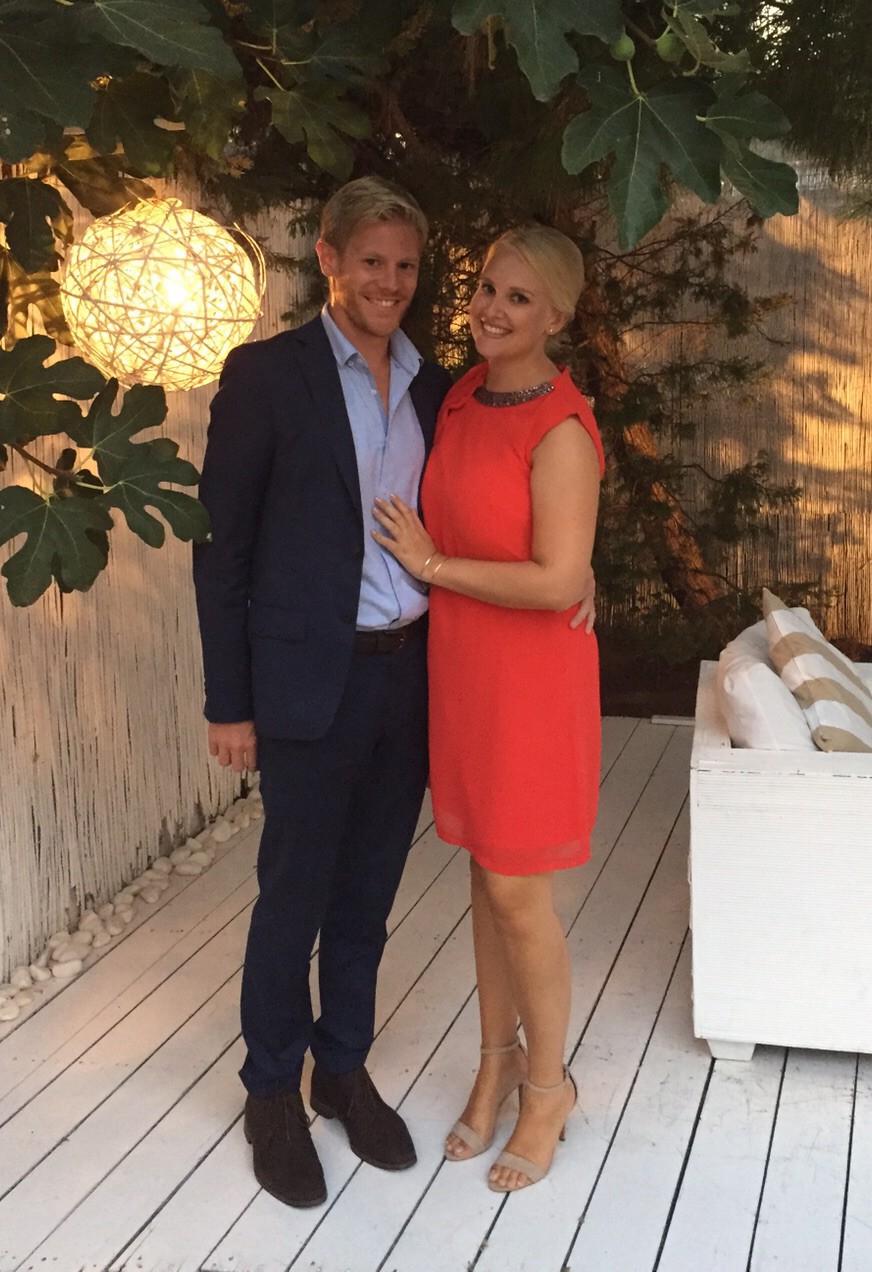 (I know, it wasn’t fair to outshine the bride and groom, but we couldn’t help it)

The rest of the night was mostly similar to a wedding in Australia: wine and food (although the quality of the food outstripped anything I’ve ever eaten at a wedding before), and dancing. I participated in a tradition Greek dance, by which I mean stumbled around in a circle trying to figure out the steps, and managing not to stamp on anyone’s feet. This pattern of eating, drinking and dancing continued until three AM when we bused it back to the hotel and literally fell into bed. The wedding had been a success.

The next day, or rather, afternoon, we emerged, ate, and made our way to the most iconic place in Athens: The Acropolis. It was genuinely stunning, and I played the game again of trying to picture it in its original state, ancient Greeks wandering throughout the columns, discussing engineering and philosophy, physics and religion. How they managed to build such a structure is beyond me. But then, I was never that good at lego. 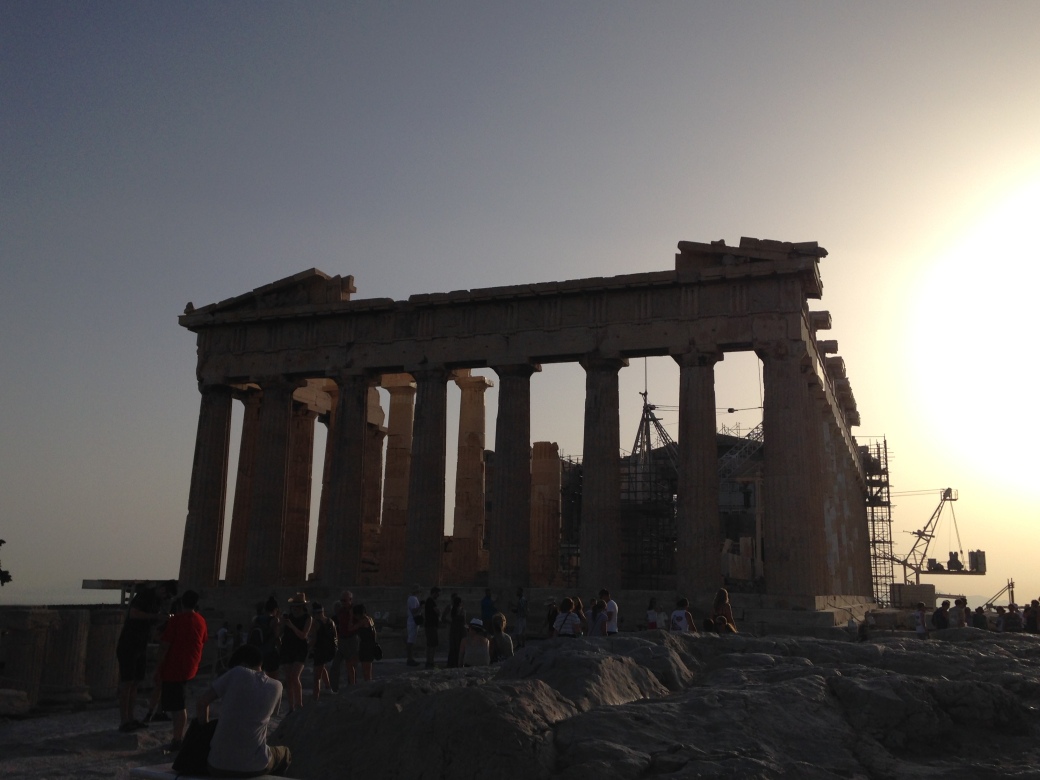 We had our final Greek meal, toasted our final ‘Yamas!’, and made our way back to the hotel.

And that brings me up-to-date. The holiday, this holiday at any rate, is all but done, and I am now sitting in my empty hotel room, wallowing in post-holiday blues. The past month has gone by so quickly, and yet seems filled to bursting with new experiences and sights, too many to be contained in twenty-eight days. I’ve seen things read about in books, and wandered roads laid thousands of years ago. I’ve walked through the palaces of emperors and learnt the history of a city. I’ve eaten amazing food from different cultures, and made new friends. It is no exaggeration to say it has been the experience of a lifetime.

Thanks for sharing it with me.