The worldwide coronavirus measures that are currently taking place are having fundamental repercussions across health, economy, industry, and, obviously as importantly, the world of fashion. As someone who is renowned for his keen sense of style, someone who is often looked to for guidance in what is considered “fresh”, it’s important for me to keep up with these trends and, perhaps, even set a few of my own.

One of the major shifts in the fashionsphere is that of office attire. The majority of the working world transitioning to home offices has opened up whole new racks of clothing choices. I personally have settled into the traditional home office look, that of the tracksuit pants. I move between two pairs of tracksuit pants, a classic navy and a stylish charcoal, that, as my wife is fond of saying, has the added benefit of making my bum “look cute”.

In our household, we tend to favour tracksuit pants by Tchibo, which is oddly enough a German chain of cafes and coffee retailers that also happen to make a mean set of 100% cotton tracksuit pants. I love tracksuit pants for many reasons — comfort, roominess, manoeuvrability — but probably what I love most about them is the inherent irony of the garment, that a suit that was designed for the running track is primarily worn to sit on the couch, watch netflix, and eat ice cream straight from the punnet.

Of course, this is not the sole item of clothing I adorn when armouring myself for the work day, as much as my wife may wish otherwise (she can be so unprofessional in the workplace). I chose to cover my torso with an article that first came into fashion in the late 19th century, an elegant and classic solution of what to do with the upper half of the body, known simply as the t-shirt.

I tend to pair my tracksuit pants with t-shirts custom-designed for yours truly. One such proudly bears the emblem of the previously mentioned Audiobook Club. (Yes, we have merch, we’re a real club, alright. In fact, our membership numbers have recently skyrocketed. To three. My older brother also wanted to join).

Besides the fetching model seen above, Damian also tailored a t-shirt for my buck’s night. See if you can catch the subtle reference to the evening’s events.

(It’s a buck. You know, because it was a buck’s night. Classic visual pun.)

Naturally, when it came time for his own stag do, I set about designing a t-shirt of my own. You’ve probably noticed the very cool double-exposed photo that acts as a banner on this website, the one that lets you imagine what I would look like if I were part tree, well, that was created by Damian. So when it was my turn to pick up the hammer and tongs and forge a t-shirt of my own, I decided to repay the favour and depict him with his beloved mountains. 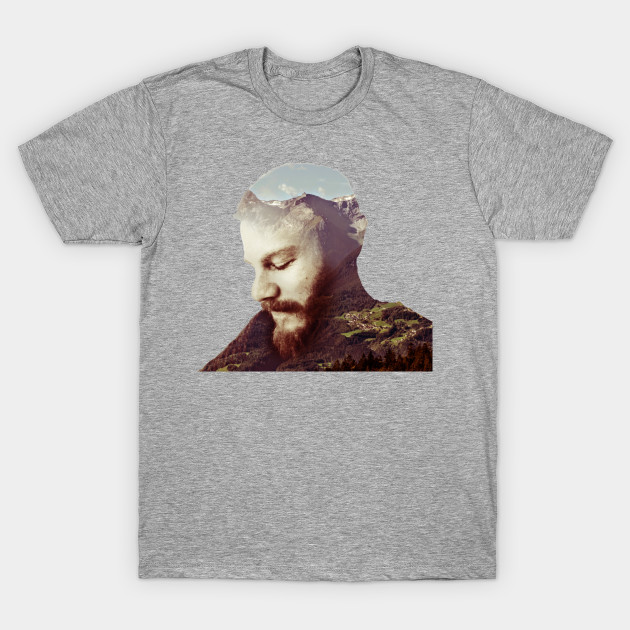 I was happy with the outcome and made sure to secure a t-shirt for myself, and find it helps when I am many miles away from my best friend to wear him on my chest. The only flaw in the design that I failed to foresee is that my wife often likes to come and cuddle on the couch, to rest her head on my chest and even occasionally give me a gentle little kiss there, only to realise afterwards that she was in fact canoodling my brother’s face. If only we could all be so lucky.

In addition to adopting home-office-slum chic, I’ve decided that being locked away from the rest of civilisation is the perfect time to finally grab the bull by the horns and attempt to grow the long and luscious beard that all little boys always dream about. Given that hairdressers country-wide are currently out of commission, meaning I will soon have flowing blonde locks to rival my wife’s, it only felt right to bring the beard along for the ride.

Once it has sustained sufficient bulk and density, I will post a photo of my beard progress, a tantalising ticket sure to see the readership of this blog go through the roof.

My advice during this surreal separation from society is to dress to make yourself happy, to feel normal, to be comfortable, and, above all, to make your bum look cute.

(If you liked my brother’s awesome geometric stag t-shirt as much as I do, he has a whole bunch of impressive designs featuring different animals in his tee public store which you can find here.)

(If you want a t-shirt featuring Damian’s face, well you can’t, that’s only for me. And sometimes my wife.)

2 thoughts on “Vienna in the time of COVID – Chapter 6”