I am sitting on the tiled floor in our apartment in Salerno, a fan at my back, with sweat leaking from every pore. My first European run was a success.

It’s half past eight in the morning and the sun has been up for hours already, the heat is rising with it. Dom and I got up early and ran along the foreshore. It was beautiful weaving through the waking township of Salerno, ducking between the picturesque apartments, and then trotting alongside the apparently endless Tyrrhenian Sea. A sea I intend to swim in today.

Yesterday we bused our way along the coastline to Amalfi, a trip that turned out to be a test of endurance and stamina. For me, at any rate. Dom and Nikki had seats and fared better. As would be expected, the road following the coast folds and winds around like a discarded piece of ribbon, which is breathtaking to look at, but a torture to ride on when standing for an hour and a half on a very crowded bus, where the air-conditioning is no match for the beating sun outside and the press of bodies within.

With every hairpin turn the bus took, my hands would clench whatever bar or surface was available, my legs and abdominal muscles would tense, braced for the swing of the bus and the jostling of bodies. By the end of the trip, I felt as if I’d done a workout.

The road was so tight that with every bend traffic would stop completely, and our bus would edge past cars with only centimetres between the vehicles. Scooters would zip through the tiny breach between bus and car like self-absorbed mosquitos. At times, cars would have to reverse around blind corners to make space for our bus to get through.

At one particularly tight hairpin, the inevitable happened — our bus and another bus entered the turn at the same moment. What followed was a jerking and jolting dance between the two buses as they very slowly crawled past one another with literally half a centimetre between vehicles. The other bus was a tour bus, and not at all crowded like our public bus. Due to the closeness of the vehicles, the passengers on the other bus were only a hand span away. One chubby little boy found the whole experience hilarious, laughing and waving at us. From where I stood, legs aching, covered in sweat and not all of it mine, squashed between stranger’s bodies, head spinning from the endless series of turns, looking into his deliciously spacious and air-conditioned bus, I wanted to slap his chubby little face.

After about fifteen minutes of bunny hopping, the two buses passed, untouched, just, and the patrons on my bus broke out into applause. It was a nice moment.

Once I arrived and got mouthfuls of water into me (from a fountain depicting a topless woman — you can guess where the water came from ) and I sat and enjoyed a beer and pizza, I had revived enough to concede the trip was well worth it. The town of Amalfi was beautiful and the view of the coast line staggering. 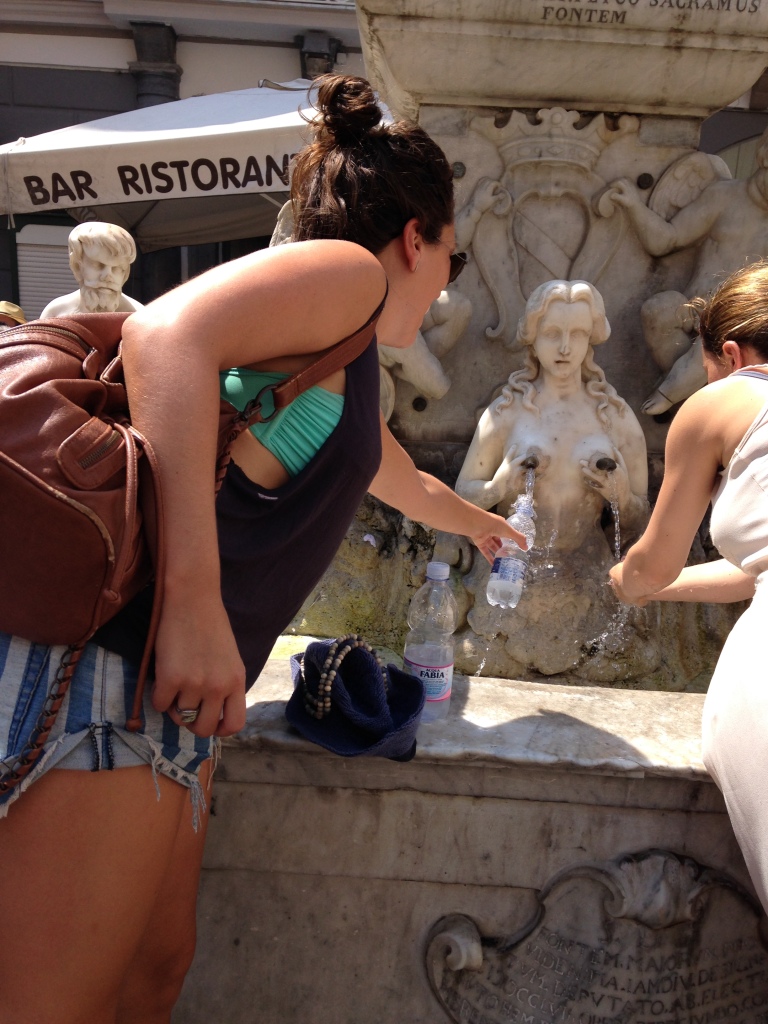 After a good explore, and some gelato, we made our way back on a bus that only ever got about half full. I had a seat to myself, was cooled by the air-conditioning, and even managed a nap on the way back.

Dom, Nikki and I have been discussing our plans for living in London and our home there, and it’s strange to know that stage is yet to come. The beauty and fairytale quality of Italy has been completely absorbing, and it’s incredible to know so much is yet to come. It’s slightly daunting, but also exhilarating, all that unknown.

I am laying in bed, a metre away from Dom and Nikki’s bed, in our new apartment in Sorrento — I say bed, but the divot running down the centre doesn’t let me forget the fact that it’s actually a couch folded down. Despite the channel splitting the mattress, I slept quite well.

It’s six o’clock in the morning, but my body is wide awake. The sun rises each day at around five-thirty and sets well past nine at night. Despite these long hours of sunlight, I don’t find myself getting tired throughout the day, quite the opposite. I think the ever-present sunlight stops the hibernating chemicals in my brain from going into action. It’s a good thing.

Our last day in Salerno was spent in idleness and relaxation, and was perfect. We sat and had coffee and nutella-filled croissants at a cafe (they’re mad for nutella over here — I’ve seen a litre tub of nutella on sale at the supermarket. I refrained from buying it, reasoning it’d tip me over the weight limit when catching flights), wandered along the shore, and went for a swim. The water was lukewarm and it felt incredible to have liquid wash away the sweat from my skin and to stop feeling hot for the first time in days.

We made ourselves some chicken schnitzel and salad for dinner, and drunk Italian beer, before settling in for a competition of the card game “Asshole.” Many more profanities than that were used by the end of the forty rounds.

Yesterday was a travelling day, and we opted to get the bulk of the travel down the coast from Salerno to Sorrento by ferry rather than bus — both to enjoy the view of the coast by boat, and to avoid another bus ordeal as experience on the way to Amalfi.

We stopped for a coffee on the way to the docks at the cafe we’d visited the day before. The big Italian mumma behind the register and I got talking (I think the six bags we had between us may have tipped her off to the fact that we were tourists). We each insisted each other’s country was beautiful and she claimed she would love to visit Australia one day. She finished the conversation by saying, “Big kisses,” and it felt good to know the ability I earned as a nurse to charm elderly woman was still functioning. If I could figure out how to turn this ability to woman within my own age bracket, I’d be set.

The ferry was heaven compared to the hell of the bus. The breeze off the ocean cooled the sweat earned from the walk to the dock carrying fifteen kilograms in luggage, and the Amalfi coastline drifted past, a continuum of craggy cliffs, houses and apartments and dome-topped churches clinging to the steep sides like insects, defying gravity. Caves pocked the rock and gulls, twice the size of Australian gulls, drifted through the scene. 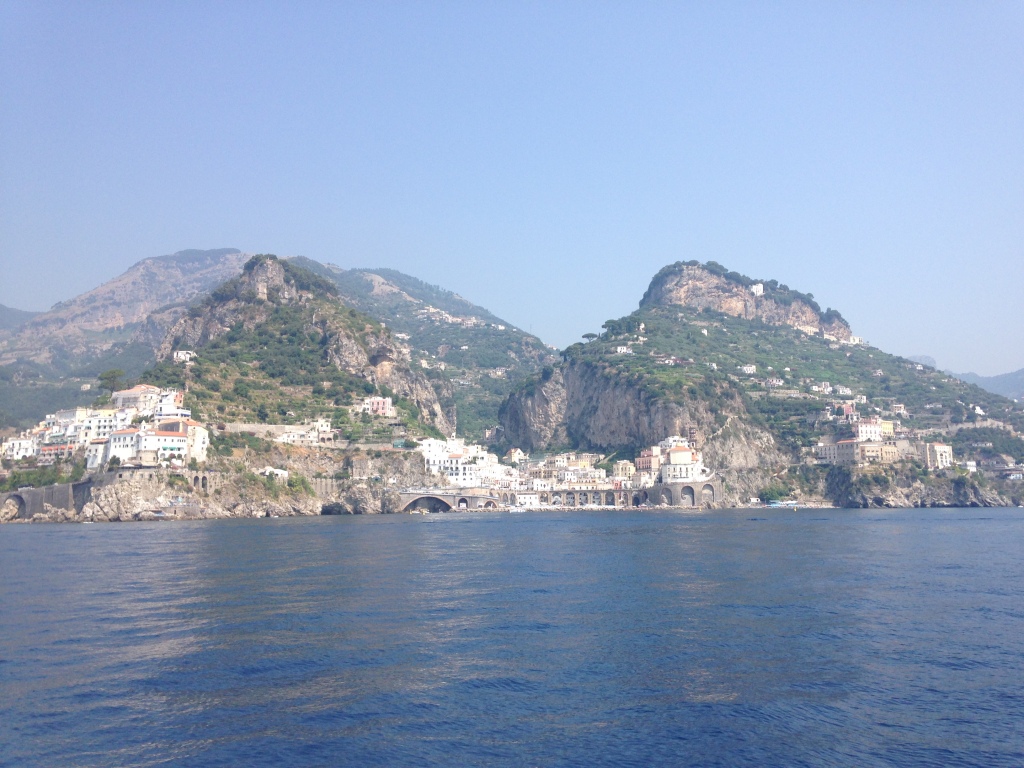 We eventually arrived in Positano and from there had to bus it the rest of the distance to Sorrento. Positano is a township of stairs as it’s built up the cliff side, and we climbed most of them in the short time we were there as the place to buy bus tickets and the bus stop were on opposite sides of the town. Whoever designed that uneconomical setup is an evil evil person. The relaxing and cooling effect of the ferry evaporated as, with the aforementioned fifteen kilograms of luggage strapped to my body, I climbed up and up and up. To be fair, the view from the bus stop was damn incredible, and the bus, once it arrived, was deliciously air-conditioned.

We had planned to meet a physio friend of Nikki’s, Tori, in Sorrento, but would arrange that once we arrived and sniffed out some free wi-fi. However, halfway through the bus trip, Dom says, “There’s Tori,” as the bus pulled over and she climbed aboard. Nikki greeted her from her seat, calling out “Tori!”, who instinctively replied with a confused “Hi,” before recognising Nikki and giving a much more exuberant greeting. The four of us enjoyed food, gelato, and explored the sprawling and stunning town of Sorrento for a few hours before Tori had to bus it back to the township of stairs. She told us after three days staying there, her calves were killing her.

I am on the Sorrento beach, cliffs rising vertical behind me, and the ocean stretching away ahead of me, apparently, forever. I am surrounded by a throng of people, packed into a small square of dirty, gritty sand that is the free section of the beach. Dom, Nikki and I opted for this sardine-like stretch of sand over the deck chairs and umbrellas checking the wooden jetties to either side to save each of us fifteen euro, essentially covering the cost of dinner.

This crowded square feels more authentic anyway, surrounded by locals of all ages, from tottering toddlers to the sun-browned elderly. At any rate, once you get into the water none of it matters — as the warm salty sea envelopes you, you feel like you have all the space in the world. The water is blue and clear, and decidedly Mediterranean.

Today is a rest day after yesterday’s efforts at Pompeii. It was another thirty-six degree day and the sun beat its rays through a perfectly clear sky, milking beads of swear from my skin on contact. I don’t think I’ve written an entry yet that hasn’t mentioned sweat, and for that I apologise, but with the heat it always seems to be on the edge of my mind. Even here, minutes out of the water, I can feel droplets forming.

Anyway, I was talking of Pompeii.

We trained it in from Sorrento where men with accordions serenaded us and a salesman wandering the carriages sold Nikki a fan — a valuable investment due to the aforementioned heat.

We joined a walking tour and stepped inside the walls surrounding the ancient and excavated city of Pompeii, which once housed twenty-thousand people until Mount Vesuvius spewed out a blanket of ash that covered the city in seven metres worth of sooty detritus. The fact that Pompeii was ten kilometres away from the mount is what resulted in it being covered with ash rather that lava, making excavation a much easier process.

Our guide led us through the ruins, and, as she described the old city and its functions, the broken ring of stones that was once a bread oven, the rectangular stone pit propped up on brick stilts that was once a spa, the space below where fires banked, steam spewing into the air for the enjoyment of gladiators, it transformed from vague dilapidated shapes into a society, into homes and shops, and I became achingly aware that people once walked here, lived here. It was eerie, and incredible, and transportive. 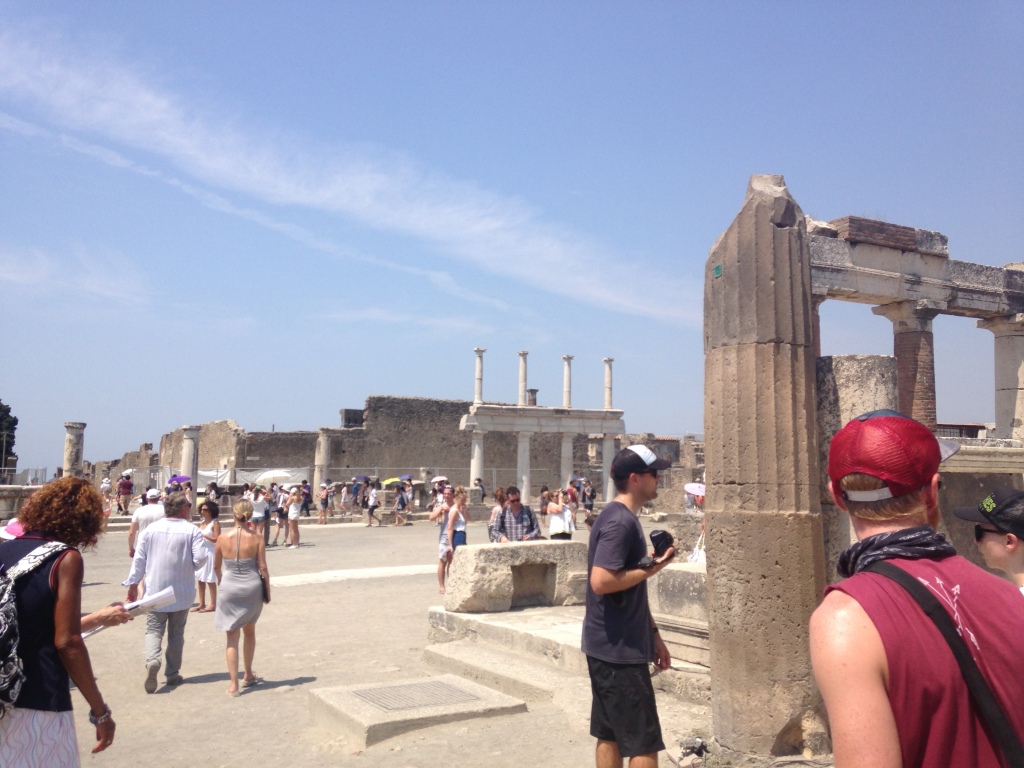 The city would once have been stunning, every wall decorated with stucco sculptures and intricate frescos. The tragedy of what happened was immortalised in the plaster casts of the dead, frozen forever in the posture of the final resting. If the reality of the place hadn’t be impressed upon me by this point, these figures would have slammed the message home that this was once a place of people, not greatly different from home. 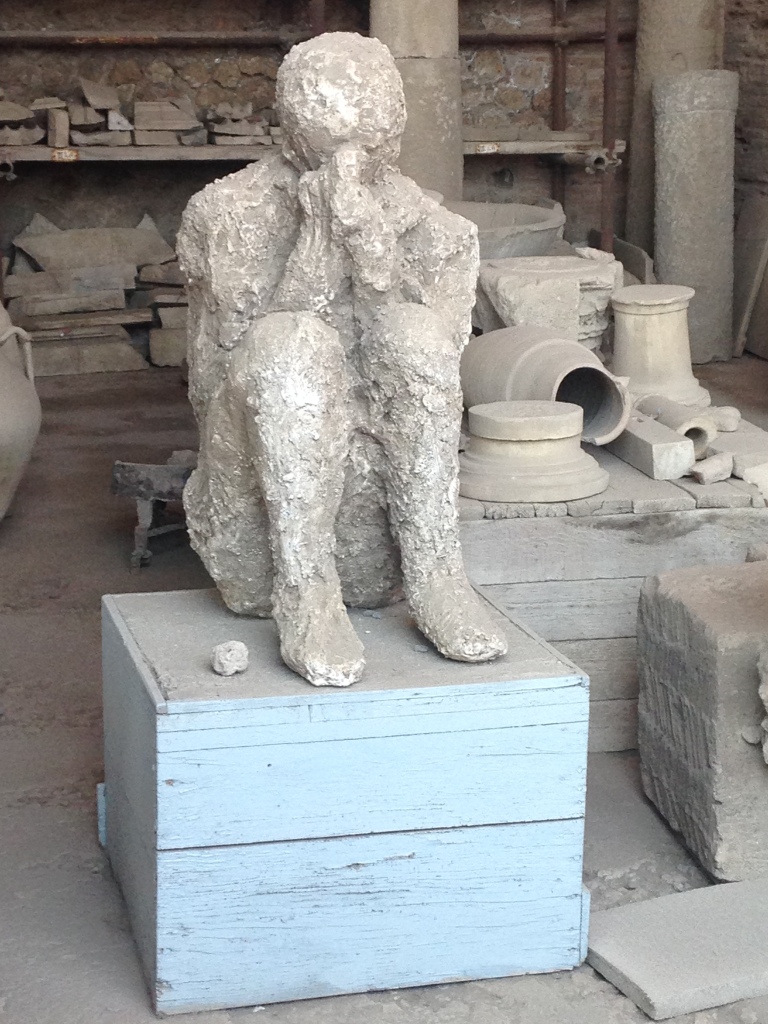 The brothel also conveyed the same message, although through different means. Artwork above the prostitutes doorways was incredibly well-preserved, giving an insight into the speciality of each woman. It was educational. I feel very worldly.

After returning home and escaping the heat (of a sort — a standing fan can only do so much) we all napped, woke, and ate. Soft cheese of brie and mozzarella, cold meats of salami and prosciutto, and fresh tomatoes covered warm bread and crackers seasoned with basil and olive oil.

It’s hard, this travelling thing, but I accept the sacrifice willingly.